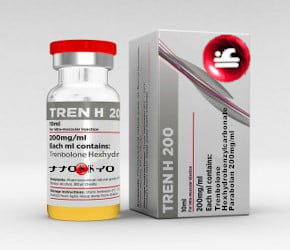 Trenbolone Hexahydrobenzylcarbonate this raw material is extremely expensive for your info!

Trenbolone Hexhydrobenzylcarbonate. The brand name and trade name for this Anabolic steroid is called Parabolan. It is a longer acting ester of Trenbolone than that of the Acetate version. Trenbolone Acetate is the faster ester and is the most popular among bodybuilders. There is a very big difference in the half-life of these two Trenbolone esters. The Hexahydrobenzylcarbonate ester has the half-life of close to two weeks and the Acetate ester half-life is only 2-3 days. Trenbolone, no matter the ester is known as the most powerful anabolic steroid available today.

WHAT IS THE PARABOLAN EFFECT?

This steroid is a derivative of Nandrolone – if you look at the molecular structure of substances, it will be similar. But Nandrolone is inferior to Trenbolone in a number of parameters. For example, Trenbolone has a very high resistance to metabolism in the body, therefore making it have a much better Anabolic effect. Also, it will not convert into Estrogen. Trenbolone is totally resistant to Aromatization, unlike Nandrolone which is not.

WHAT IS TRENBOLONE HEXAHYDROBENZYLCARBONATE?

Trenbolone Hexahydrobenzylcarbonate, also known as Tren-Hex, carries the trade name Parabolan. This is the longer acting esterfied variant of the Anabolic steroid Trenbolone and is an injectable steroid. The base steroid of Hex (Trenbolone) is about three times more Androgenic than Testosterone, making it a pretty potent drug. Tren-Hex was originally developed in France in the 1960s and was the only known form of Trenbolone to be produced as a medicine for human consumption. It was later pulled from the market in 1997. Parabolan is a structurally altered form of Nandrolone. For the Trenbolone hormone to exist, the Nandrolone hormone has an added double bond at two carbon positions and is said to be extremely powerful. In case if you didn’t already know, Trenbolone is very, very popular in the world of bodybuilding.

Tren hex is considered to be one of the best cutting steroids of all time. It is a known fact that many competitive bodybuilders will not prepare for a show without using this steroid. Tren hex will provide you with tremendous fat loss effects but will also preserve the muscle mass gained while training. Trenbolone will harden your physique like no other steroid.  If you are already lean, you’ll appear harder, more vascular and much more defined following the cycle. Parabolan can be used on its own but it’s recommended to add Testosterone into any cycle to avoid suffering any sexual dysfunction. When cutting, stacking Tren Hex with other Anabolic steroids such as Masteron or Winstrol will only intensity the already dramatic effects of Tren Hex.

Because Tren Hex is a longer acting format of Trenbolone, cycles of Tren Hex usually run a bit longer than normal (in the range of 12-14 weeks).  This is due to the amount of time required to achieve peak optimal blood plasma levels of the compound.  Athletes and bodybuilders reported noticeable changes and gains anywhere between the fourth and sixth week of the cycle. For this reason, it is highly recommended to cycle this steroid longer.  By cutting the cycle short, the user will not benefit from the full effects of this steroid.

Calling all Trenbolone lovers! Not only is there Trenbolone Acetate and Trenbolone Enanthate but there is also Trenbolone Hexahydrobenzylcarbonate! Thankfully, most steroid users know this as Tren-Hex. Can you imagine trying to talk to your gym buddies about Trenbolone Hexahydrobenzylcarbonate? If they aren’t experienced with steroids, they might think you are making that word up. In any case, it is a real word and it carries with it as much potency as letters! Let’s get down to business and tell you exactly what Tren-Hex is and why you should make this part of your next cycle…

TRENBOLONE HEXAHYDROBENZYLCARBONATE: THE MOST POWERFUL STEROID

Trenbolone Hex and many other injectable steroids are in high demand in bodybuilding, powerlifting, crossfit, and other sports. However, boxers are not in a hurry to use Trenbolone Hexahydrobenzylcarbonate, because it significantly increases muscle mass. For a two-month cycle, an athlete can gain 15 to 20 pounds, and in boxing the weight category is very critical.

But in bodybuilding the athlete will use Trenbolone to get all the benefits that this powerful steroid provides. It is possible in a short period of time to gain muscle mass of excellent quality. In this case, without a set of adipose tissue, because the drug is not prone to water retention or bloating. Powerlifters and other sport athletes receive from this steroid a significant increase in power indicators. At the same time, the mass in growing, but “pure”.

SO WHY TO START USING TREN HEX?

Tren-Hex is a very powerful steroid that has a slew of benefits when used properly. Initially, this steroid was used to treat muscle wasting diseases because of it’s amazing protein synthesis and retention of nitrogen. Both of these play a key role in building lean muscle while preventing the body from going into a catabolic state. The Anabolic activity of Tren Hex is enhanced by the increased rate of red blood cells. With the circulation of red blood cells and an increase in the amount of red blood cells, more oxygen can be delivered to your body. What does this do for you? Your endurance will go through the roof when you work out rather than feeling lethargic after doing a few sets in the gym. Working out longer and harder can be a tremendous benefit to you in the long run, especially when you have a set goal in mind and are using Tren-Hex along with any other steroids. Trenbolone in general is known to burn fat and increase your metabolism. Add this into your already clean eating and intense workouts and reap the rewards greatly. Tren Hex allows the body to process the nutrients from foods that are consumed more efficiently, which will make the fats, proteins and carbs in each meal more valuable to your body as a whole. This leads to well fed muscles.

With regards to bodybuilders and athletes, the benefits from Tren-Hex will also be amazing. Trenbolone is said to promote muscle hardness and definition and will increase vascularity in those who are serious about their physical condition. Known for its drying effect, Tren Hex will make the skin appear thinner and therefore muscles will look more pronounced and chiselled, especially when your bodyfat is very low.

WHY TO USE TRENBOLONE HEX?

TOP RECOMMENDATIONS REGARDING BULKING AND CUTTING WITH TREN-HEX

Tren-Hex is so powerful that you can utilize it for both a bulking and cutting phase. For bodybuilders and athletes in the off-season or who are considering a bulking cycle, Tren-Hex can be used but if done so on its own, won’t provide the best results. Stack this steroid with other bulking agents and it will consolidate your gains, harden muscles and increase strength. Another added bonus of using Tren-Hex in a bulking phase is that it will provide a greater capacity for more intense workouts. When adding Tren-Hex to a bulking stack, the gains you see, will be all clean gains with as little fat as possible. The good news when considering a cutting cycle is that you can use Tren Hex on its own and still get good results. When cutting, we are already depriving the body of the extra calories so while burning fat, Tren Hex will work to burn more fat, pump up your metabolism and promote extreme leanness as well as muscle shape and definition. Tren Hex will also protect your muscles from atrophy which tends to occur when we are calorie deficient while still training vigorously. Some actually say that you can combine any two steroids together and not get the same results that you would from cycling with Tren-Hex. Recovery time will also be quicker if using Tren-Hex in your cutting cycle. Trenbolone will keep your strength up when you are working to cut the last bit of fat on your body. Bodybuilders have stacked Tren-Hex with Primobolan, Masteron and Winstrol when running cutting cycles while using Dianabol and Anadrol with Tren-Hex for bulking cycles.

Tren-hex can be used in cutting and bulking cycles with great effectiveness. While many use this steroid during a cutting phase, Tren-hex can be almost, if not just as beneficial to the off-season or bulking phase. This is because it is considered one of the best mass promoting steroids out there. With the use of Trenbolone all the weight gained during a cycle will be muscle mass. Another advantage of using this steroid when bulking is there won’t be any water retention. Some of the most popular steroid combinations for bulking with Tren Hex include the use of Dianabol, Anadrol or Deca. These cycles will promote lean mass gains.

Trenbolone can improve strength performance during workouts, improve muscle endurance, and make an older athlete more resilient to injuries. You need to be prepared for the fact that you have to drink more water – the drug thickens the blood. And it thickens seriously, so with constant admission you need to take tests and monitor the progress of the body. You should not play with such serious things if you need to keep your health under control.

Trenbolone Hexahydrobenzylcarbonate is a derivative of Nandrolone, so you can compare it with this drug, but only by the molecule structure and nothing else. Trenbolone is hands down the strongest steroid available for purchase today. There are no other compounds that work like Trenbolone. Most other AAS do not come close to the strength that Trenbolone has. This is what makes it so popular in the bodybuilding and fitness industries.

CYCLES WITH TREN-HEX: HOW TO FIND BEST DOSAGES?

Tren Hex cycles are said to last anywhere from eight to ten weeks but will depend on the user and his or her goals. Those who have used Tren-Hex in the past have seen changes in as little as three weeks. Although 8-10 weeks is the common length of a Trenbolone cycle, a twelve-week cycle can be done by those who can tolerate the associated side effects. In any case, there is no length of a cycle set in stone. You can read all the articles online and ask around at the gym and you’ll find that everyone does what works for them as an individual. Find your sweet spot and stick to it.

How to stay alive as a bodybuilder